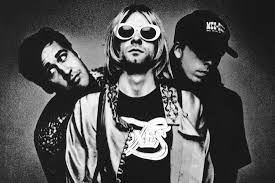 I’d lie if listing the 10 most important songs without including Nirvana. I included this one that I (sometimes) excel at in karaoke. Otherwise, I don’t know what I feel about the band these days.

I’d lie if listing the 10 most important songs without including Nirvana. I included this one that I (sometimes) excel at in karaoke. Otherwise, I don’t know what I feel about the band these days. Maybe it’s just a “teenage thing”. There aren’t enough sounds! At least add a synthesizer, please 🙂 But back in the days, I admit, I was a Nirvana kid. I heard of Curt Cobain’s death on the very day that I went to the ticket office to change my concert ticket because their show in Sweden had been postponed. That’s life without Internet 😉

Friday May 18, 2018.
Here you are sitting in your wheelchair for the first time.

Hi Harald. The clock is 14 now and you are sleeping on and off. You slept bad last night, and sitting in a wheel chair is also depleting your strengths. The red and white thing you’re sitting on is a lift blanket. We are using a ceiling hoist to move you from the chair to the bed. You sat in it for 30 min. Next time it gets longer. In hall 4 today. Ann Vivi

I looked happy in the picture, and maybe said a word or two. But where was I? In a long, long fantasy, like a dream. And just like a dream, the story lines aren’t always connected.

In one fantasy, I was on a boat, and they transported me across the Baltic Sea. First Helsinki, then Tallinn, then Riga etc, off and on until back to Stockholm. So people who came to visit, came from these places. I have vague memories of friends who came, from various cities. (Although they were all from Stockholm of course, as I was in a hospital and not in a ship.)

I also needed to flee. I don’t remember why, but I needed to get out of that place. And friends who came were supposed to help me. I remember my sister visiting me once, and I spent the whole time looking outside a window. Looking outside was, somehow, fleeing.

She was there the whole day, and I hardly spoke, but she told me afterwards that the staff came and where like: “Is he walking? He can’t walk! Make him stop!”

In one fantasy, I had invested in 300,000 Norwegian kronor of “level 3”. Level 1 was normal currency, for paying your rent or buying food. Level 2 was an investment type of currency, that people could speculate in. Level 3 was a secret currency, that was only used by the government and criminals. It’s value fluctuated heavily, and I invested in 300,000 of those. And then I had to avoid the criminals trying to steal it from me. I had to work in the very cold snow of Northern Norway, and the criminals were there as well. One of them was working in the hospital. A short, wide guy with blond hair. Maybe Uffe? The only face I remember from Karolinska. I told him once, in proper words, “I know what you are trying to do with me but it won’t work”. He wasn’t surprised. You hear all kinds of things in a neurological hospital 😉

Speaking of fantasies, one is that if you occupy the central parts of your city, occupy a subway station, and keep throwing gases on cars and stones at the police, you somehow get a revolution. I was in Santiago this winter, 20 months after the accident.

This friendly demonstrator is helping me demomstrate “Congratulations Mom!” It was her birthday. Congratulations! And you also got your own son back from the brain hemorrhage! What a present from the Stockholm health care system 🙂

So pay your taxes! And avoid the taxes going straight to Skanska through Luxembourg. Because then we lower the chances of Swedes ripping up the Stockholm streets like they do in Chile.