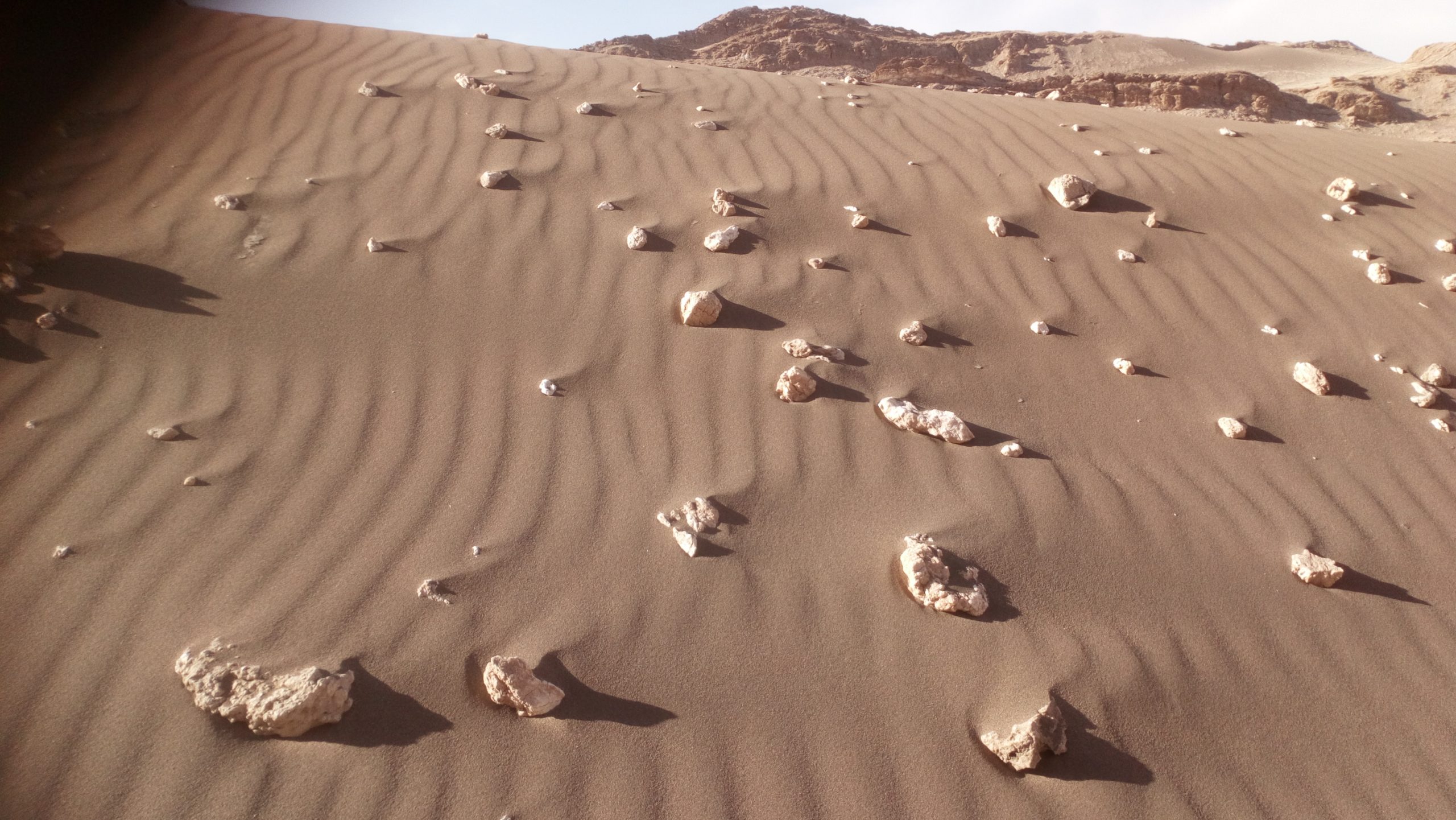 Good morning! This is Atacama, the world’s driest place. (Possibly tied with parts of Antarctica where no snow falls.) Getting out of the bus, I realized that I had come … nowhere. I just wanted

This is Atacama, the world’s driest place. (Possibly tied with parts of Antarctica where no snow falls.)

Getting out of the bus, I realized that I had come … nowhere. I just wanted to get on again, and be taken to a city. After a few seconds, everyone who got off the bus had disappeared, making the desert city more deserted than ever.

I found my hostel quite soon. I banged the door, rang the bell, no answer. It was 7-8 in the morning. It was cold when leaving the bus, but you could feel it getting warmer and warmer. I laid down on the street and slept, until being let in at 9 by a guest. I sat in there and used the really slow Internet, waiting for the owner. At 12 I started talking to the cleaner, and after a while the owner came. I think he went on cocaine or something, because he was so ridiculously positive, so that you wanted to kill him. “Oh, Sweden, great, oh Stockholm, that is the best place, isn’t it blablabla.” I like most people, but that kind of talk just want me to sit on a bench with some Finns and exchange maximum one word for every drink. I changed my stay to just one night. The desert is already killing me!

After checking in and having a shower, I found the “main street” of the place, which was packed with people. A restaurant sold a “falafel menu” with falafel for first course and Chilean lentils for main course. Lovely! A bit expensive. Full of Koreans. Tourist trap: 100%. And I love tourist traps, since they’re often so good at packing you full of various beans <3

The best place to discover this area is to get some information and a bicycle. Or, if you’re an ignorant and lazy asshole like me, to walk into the nearest travel agency and give them money and then wait until the train of people picks you up.

Here’s the tour guide talking on the bus. She kind of grew during the trip. In the beginning I was like “OMG, shut up”.

We came to this valley, with very dangerous slopes. No fences or European shit like that. Don’t fall!

Here is where they tried out the Mars rover, since this landscape is the most Mars-like we have on this planet, with no water and hostile slopes everywhere.

But everything wasn’t bad here, since I found these two wonderful Swedes! Linnea and Nellie, both from Stockholm. Here we are: red line, blue line and green line. I haven’t talked this much Swedish since I was in Europe. What a weird and lovely language we have! Like singing barbarians. They were the friendliest Swedes I’ve ever met in South America.

Nellie, you know that you’re sitting on a ledge, and if it doesn’t like your weight, you’re dead right? Ok, good, thanks. It was fun how Nellie was all sports-like while Linnea was always afraid. I think I’m more of Linnea here, I don’t love heights.

Weird land. If the whole planet was like this, we wouldn’t exist.

It’s difficult to capture the feeling with a camera but anyway, here it is.

Weird rock formations made by the wind and the contents.

Linnea and Nellie preparing their epic self-shoot. Their camera blew down. I’m sorry for not saving it! I had no idea. The wind was so hard. But I hope the camera made it. It seemed like it had survived a lot.

If you had to stay for the rest of your life in Tokyo, Taipei, Berlin or right here, what would you choose? I’d go for Tokyo, Taipei or Berlin.

Dry dry stones sticking up from the sand.

Two Dutch girls. From Utrecht! The best city in the world, or at least in the Netherlands.

The reality looked like someone had made it in Photoshop, and slopped with shadows here and there.

We started climbing a hill to watch the sunset while the guide was talking a bit about this and that. First I thought she was really a geologist, and then an astronomer (there’s a lot of space stations around here).

We found the top of the hill! The weird German is having a rest on the very top of it.

Another group showed up, and there was no disciple on them at all. They kept breaking all the rules with the risk of their own lives. Here’s a man walking further and further down the hill for a fun photo. Eventually, our guide chased them away. I was so impressed about all her talking that I had to ask what she really did in her life, because it was definitely not guiding. She said “I’m a lawyer, so I’m good at fighting with people.”

It got dark quickly as we drove home. There was no street lights, but worried cyclists here and there. Don’t quote me now, but I was so glad to sit inside a warm car and not on a sporty bicycle.

I went to sleep directly as we came home. The whole hostel was partying, but I just fell into sleep in the disco music. It was like sleeping to the sound of your own children playing.