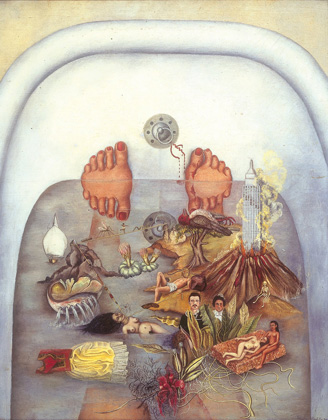 Every visitor makes you pay 10 euros more. Jesus, the after party is here! Went to have breakfast and saw this bike gang coming. I thought it was a competition or something, but while watching

Every visitor makes you pay 10 euros more. Jesus, the after party is here!

Went to have breakfast and saw this bike gang coming. I thought it was a competition or something, but while watching while having breakfast, I saw tons of cyclists going in various directions, and none in a rush at all. Maybe it is just a … cycling road? I have to love these “hipsters”!

Bread made on black beans, with green beans on top! Such an amazing breakfast.

Here is my home in Mexico City.

Hitler and his 12 disciples?

A subway is the lunges of a city. It really is. The air of Mexico City is famous for being bad. Or was – because of this new subway and many other measures, it’s now about as “clean” as Los Angeles. One out of 17 Mexicans die from air pollution. Take that times 21 millions, and let’s say the metro cut air pollution by 50%, and it has then allowed 600.000 Mexicans to simply live … by being able to breath clean air. Or, live and live, they died from something else of course. Such as “overweight, high blood pressure … and lack of exercise”, that is, not cycling 🙂

But I love this metro. It is currently taking me from Condesa to Coyoacán for 25 euro cents.

A bit too dark, but in here you see Josef and Maria baptizing Jesus. All you need after the subway!

I’m going to the vegan fair.

There’s so much cat stuff on vegan fairs, while dogs are non-existent. Which is interesting, since cats – unlike dogs – need a bit of meat!

Cat owners are supposed to be more introvert, more thinking, more creative and less happy than dog owners. (And there might be no causation btw.) What makes you more introvert and less happy than thinking that we, humans, are currently separating 500 million calves from their mothers every single year? Which is like separating human babies from their mothers, since calves have almost every feeling that we do. That makes me unhappy to think about! And I might want to tell this to a cat who doesn’t give a shit, but is just happy. Happy like a dog-owning human.

I bought these two, for my bags. Not that I am a vegan or has a cat right now. But I’d love to!

Here is “The Jappy Farm” presenting their spreads! All very delicious. Too bad you need a fridge though, since I’m not travelling with one. Not yet!

And here is a doctor of philosophy presenting his spreads! Lovely. Although a bit sugary for my taste. A friend of mine started studying philosophy, and another friend – who has a shop – said that a philosophy degree was the most common degree among his workers. This guy is selling spreads 😉 And he said that Coyoacán is the coolest part of the southern part of the city, like Condesa in the north. He recommended a walk to the Frida Kalho museum.

OK, let’s check it out! Here they are playing football.

And here they are cycling! Speaking English … I don’t know if that is good or bad for the part’s reputation. I saw no boys holding hands. In Condesa I saw three hand-holding couples yesterday. But Frida Kahlo is worth a lot of boys holding hands of course.

There’s quite a queue to the Frida Kalho museum. Too much for me! But I’ll read her Wikipedia page and summarize it here: Kahlo was born in this very house in 1907, and started working with engraving pictures as a teenager, and after a bus accident, she jumped on making art. Her images were mostly of herself, with a variety of old Mexican symbols, both pre- and post-Columbian. This has made her a Mexican heroine, and she is present on the largest bills.

She didn’t survive by her art until late in her life. A typical artist’s story. And she was focused on just living her own life, and do what she felt like, despite the machismo present in Mexico in those days, and this has made her a Feminist icon. Not for doing anything special, as far as I know, but just for trying to live in a world strangled by men. All her pictures are photos of herself. But this one only has her feet, and is regarded as the main “surrealist” one:

Then I found a Japanese restaurant with no Japanese food.

So much running! I’ll go get new “dinner shoes” so that I could start running with my normal shoes. I’d love the exercise, and I’d get to see more of the cities!

If you wonder about my money, then it’s change I got when selling an apartment and buying a cheaper one, in Stockholm. The money for the first apartment I got by translating for example a bunch of Assassin’s Creed games. So thank you Ezio! Your pollution of young people’s minds have given me wings.

I have no idea who the man on Kahlo’s forehead is.

All he wanted to do is poop outside. Dogs are supposed to be so smart. But they can’t use the litter box like a cat can. Makes me wonder …

One day, I’ll buy one of these stupid art paintings and put on my wall. You have been warned!

I got new shoes today. I tried three different stores and kept on saying “mas grande”, “muy grande”, “whatever … eh, big blue shoes please!”. I hated it. And as soon as I settled on a pair of shoes and could start running, I got all dizzy.

In my dizziness, I kept walking around in this shopping centre. The board games were more expensive than in Sweden. And I guess in Spanish.

Isn’t there something wrong with a Buddha in fancy clothes? Buddhism is all about forgetting everything that you want, in order to not become unhappy. I find it a little bit … depressing.

I really wanted to go through that small door, but wasn’t brave enough. I also walked out through the big one. No board games inside.

There was a restaurant part in there. I was a little bit aggravated by my vegan visit this morning, so I tried to get vegetarian protein in any of the many restaurants. Impossible! No tofu in the Chinese shop, no falafel in the kebab shop, no beans in any of the mex food shops. Jesus, what a pain to live like a vegan here. It’s an honourable fight! I got angry, and dizzier, and didn’t know whether to solve it by ordering a burger with extra bacon, or find a super market and see if there was tofu. I chose the latter, and we found it! 2 euro each, like in Sweden. Lovely! I also got my booze, olive oil and peanut butter in there. I have now shopped everything I needed. I put my dizzy brain on the subway home, and went to bed and passed out.

Woke up in the evening and walked to the nearest open restaurant. It was Japanese! They shouted “Irashai”, welcome in Japanese, when you come in. A bit peculiar. And there is no miso ramen!

And here is a Mapo Ramen. The noodles were good. The soup was too little. The sauce was packed with chili-flavoured seafood. Very Mexican. I liked it. Wouldn’t eat it again. I give it three harolds out of five. And then I went home and crashed again. My throat hurts 🙁 So ridiculous to get it right after fasting for 67 hours to get a better immune system. I blame it all on the two oranges!