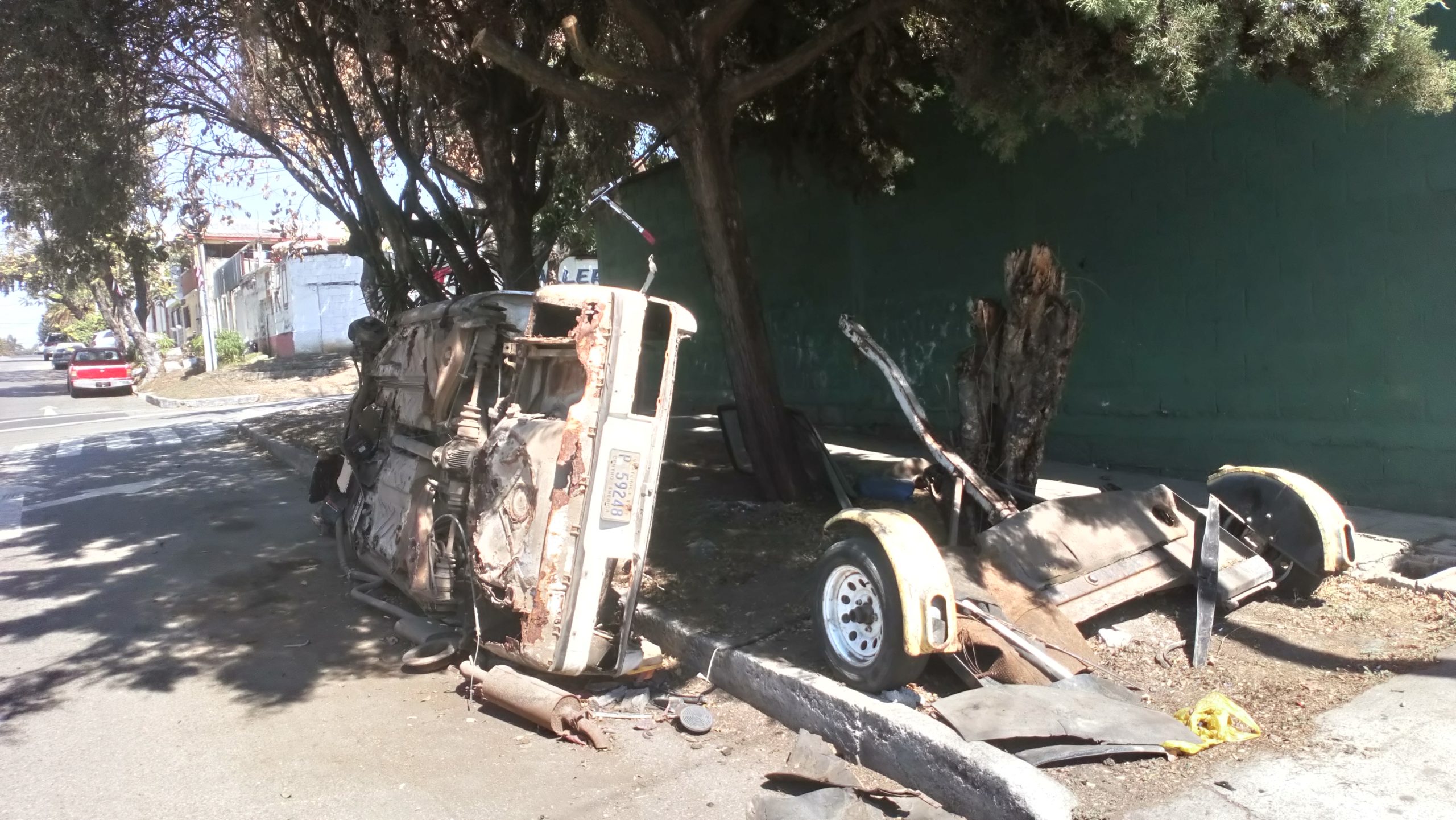 Woke up early and took the 5:30 bus to Guatemala. Why are their buses so early all the time? To skip the traffic jam? Here are all the cars entering San Salvador at 6 in

Woke up early and took the 5:30 bus to Guatemala. Why are their buses so early all the time? To skip the traffic jam? Here are all the cars entering San Salvador at 6 in the morning. I got the first seat today 🙂 Too bad they have this curtain down so that we don’t see so much …

And here is the police, checking everything.

We stopped after a while and everyone got out the bus. Lots of people trying to change money. Gah. I understood after a while that there was no passport here, only eating! This woman wanted 3 USD for pancakes with chocolate inside. Mmm. But I have to think of my body! 1 USD gave me 8 oranges 🙂 Lovely breakfast.

And here are the bus drivers eating their juicy food. Nom, nom, nom! 20 minutes later, I suddenly see one of my oranges rolling around their legs. Suddenly, the driver found it, as it approached the gas and brake pedals. And they knew it was mine. I’m sorry! I didn’t mean to cause an accident or anything.

Leaving El Salvador! They accepted me not having an entrance stamp, and didn’t give me an exit either. Now I only need Guatemala to give me an entry stamp …

Hello Guatemala! They gave me an entry stamp. So nice! I love the feeling of being stamped-in in a country.

Change money? Cambio? Dollars? Jesus, how much do they change on a given day? They’re everywhere.

The Ticabus hotel was 25 USD. Tomorrow’s bus leaves at lunchtime, so I could take an other hotel if I felt like. So I decided to really check if they had hot water. And they did! And fast enough internet! Oh, I’ve been sooo smelly. But here I’ll be sooo clean. So happy!

And if this wasn’t enough, I also found a laundry place where they’d clean and dry my clothes in two hours, for 4 euros! And next to it, a guy with a sewing machine, fixing all the holes in my pants for 2.5 euros! I had bought needle and thread to do it myself but … it was too difficult. Specialization! He moved the sewing machine with his feet. It took 5-10 minutes to fix the trousers everywhere. The planet thanks me! And I do love the old trousers, I must admit. Unfortunately, I didn’t take photos of them, but only on this car that was “parked” between them and my hotel.

I caught a flying plastic bag, and filled it with plastic from the street. It’s quite fun to pick up trash actually. And people who see you, might wander, what is this guy doing? And one or two will get it and realize that shit, maybe I should throw my trash in a trash basket next time? It’s not that hard! I remember discussions I had with my friends as a kid. I wonder who raised me like that, because my parents didn’t :p Maybe the boy scouts?

Scandinavian gym! Get your own fit and trim Scandinavian body 🙂 Jesus, I need to start running again. It’d be a great way of seeing all the cities!

If you don’t want to run on the expensive gym, play some football on the street!

I took out some extra money here, feeling to really party the place to pieces. But the salad of this place grabbed me in. Something green-but-not-lettuce that smelled fantastic. I tried to get some juice but ended up with a hot corn soup. OK. Quite good actually. Nom! I probably drank a whole corn bar.

And here they’re making the magic!

Salsa, guacamole and greens. And then I was considering getting a Uber to the centre and find an English-speaking pub somewhere … but sober? Nah. I decided to walk back to the hotel and wave for taxis. But nobody wanted me. And I wanted another hot shower and my hotel bed. Lovelyzzz