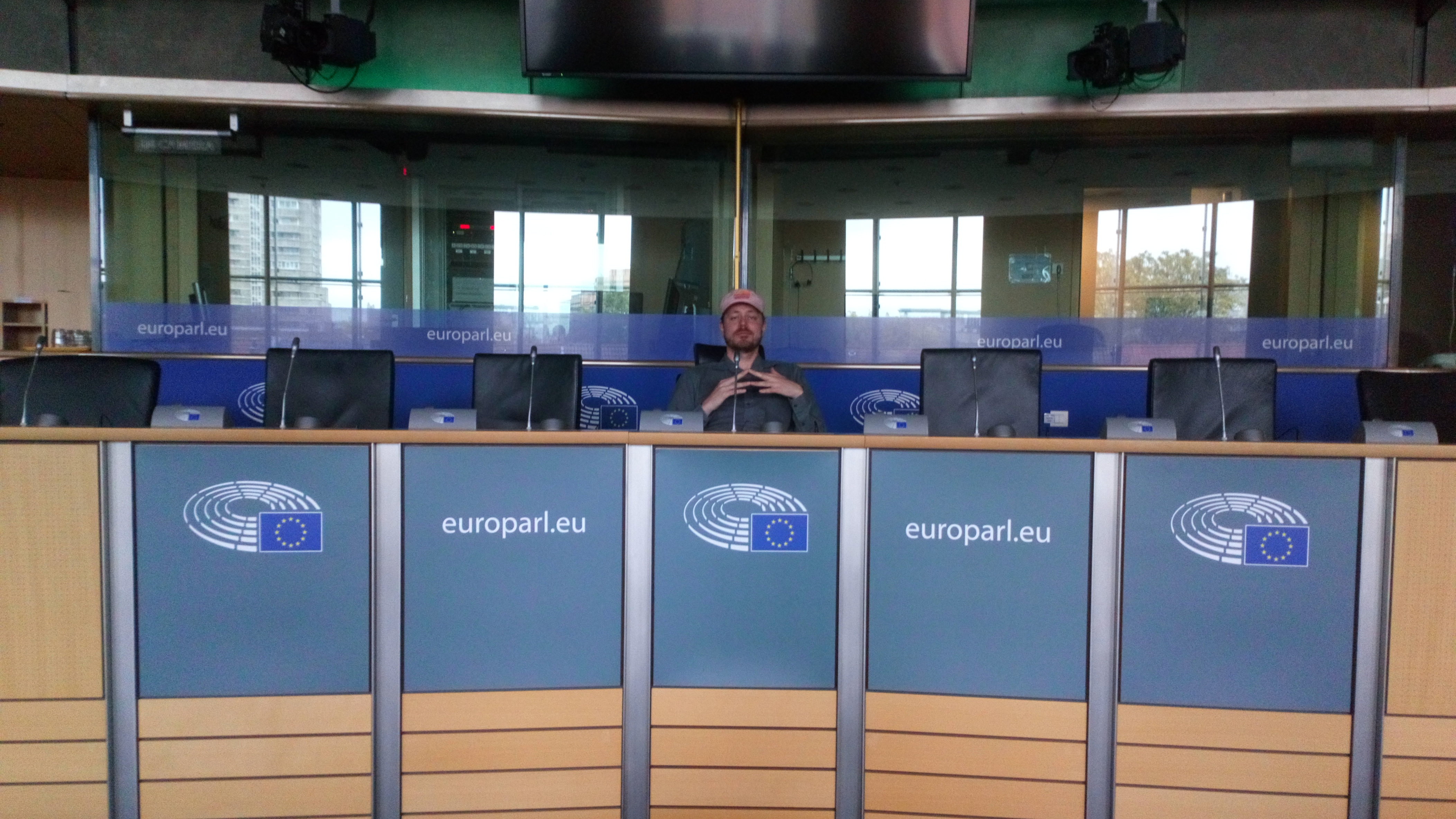 Today I went to the European Parliament. In the picture above you see me decide that we introduce a European carbon tax, by the Canadian model, with all revenue divided out equally to each European

Today I went to the European Parliament. In the picture above you see me decide that we introduce a European carbon tax, by the Canadian model, with all revenue divided out equally to each European citizen, in order to not get the lower class riots that plagued France. It wouldn’t be 1000 dollars per person, but a good step towards there. This is also, btw, exactly what Andrew Yang suggests for the USA. What a difference it would make! Environment and solidarity in one simple reform. I love it.

The person who let me inside the building is Daniel, who was the “first curator” (=boss) of Uplands nation in Uppsala. I was doing theatre back then, and joked with him in almost every play. The fact that he still accepts me as a friend is credit to his big tolerance and self-distance. We sat down and talked a bit about politics. He was very curious about the Canadian carbon tax, and diplomatically stated that the only major Swedish party who’d like to give that tax power to the EU is his own party, the Liberals. We talked a bit about their new party leader, who is originally from Burundi but also famous for a series of – for some people – controversial immigration issues, such as checking if girls are circumcised or not. I met her once and told her “good luck” about her party leader candidacy. I like her. I think that she deep down wants to do good and is thinking a bit outside the box. But we’ll see. My main criticism against her is that she is flying just to party with friends. That means that she has not understood the situation humanity has put the planet in. As long as Liberals keep on like that, I’ll be 100% Green, despite thinking a bit different on some issues, such as asylum rights.

Daniel didn’t approve of my thoughts about asylum rights at all. And he is an expert. Currently recruited by the European Asylum Support Office in Malta. He said that if Sweden just picked refugees manually, and sent home everyone who just arrived, then Turkey and Lebanon would do the same with Syrians, who’d then die in millions. I’m sure we can edit the system to keep what’s good and get rid of the bad. I’ll get back on that later. Daniel also secretly hoped that more Swedish friends would join his big apartment in Malta and enjoy the sunny beaches while Sweden suffer under the winter that never ends. If you’re such a friend, please save the money and time to take this boat: http://www.virtuferries.com/. As lovely as Daniel is, you don’t want to drown a Bangladeshi just to bath at his lovely sweet asylum beaches.

In the cafe we also met Anders Wijkman and Jytte Guteland, two Swedish politicians. I told them about my boat trip and thanked Jytte very much for her movie to my friends Johanna’s and Olle’s stag-party. I said that she was my recommendation to the EU parliament for everyone who’d vote for the Social Democrats, having for example worked towards a higher coal price by changing the rules for the EU emission trade, which has already led to coal mines shutting down because they’re simply not profitable anymore. Which, in a way, is similar to a carbon tax, encompassing 45% of EU’s emissions.

After the parliament I took the train to Leiden in the Netherlands to visit my friend Jasper and his family. We had a fantastic lasagne for dinner, and then we went playing at the bouldering club. Climbing, beer and board games in one combination. You don’t find that in Sweden (although I’ve tried). In the image above we’re playing Greenland, a fantastic game by Phil Eklund. In Greenland, you have your people, and they keep dying from everything, from sharks, bears and by fighting themselves. I played the Thule (Inuits) who – just like in real life – killed the Norse that Jasper played.