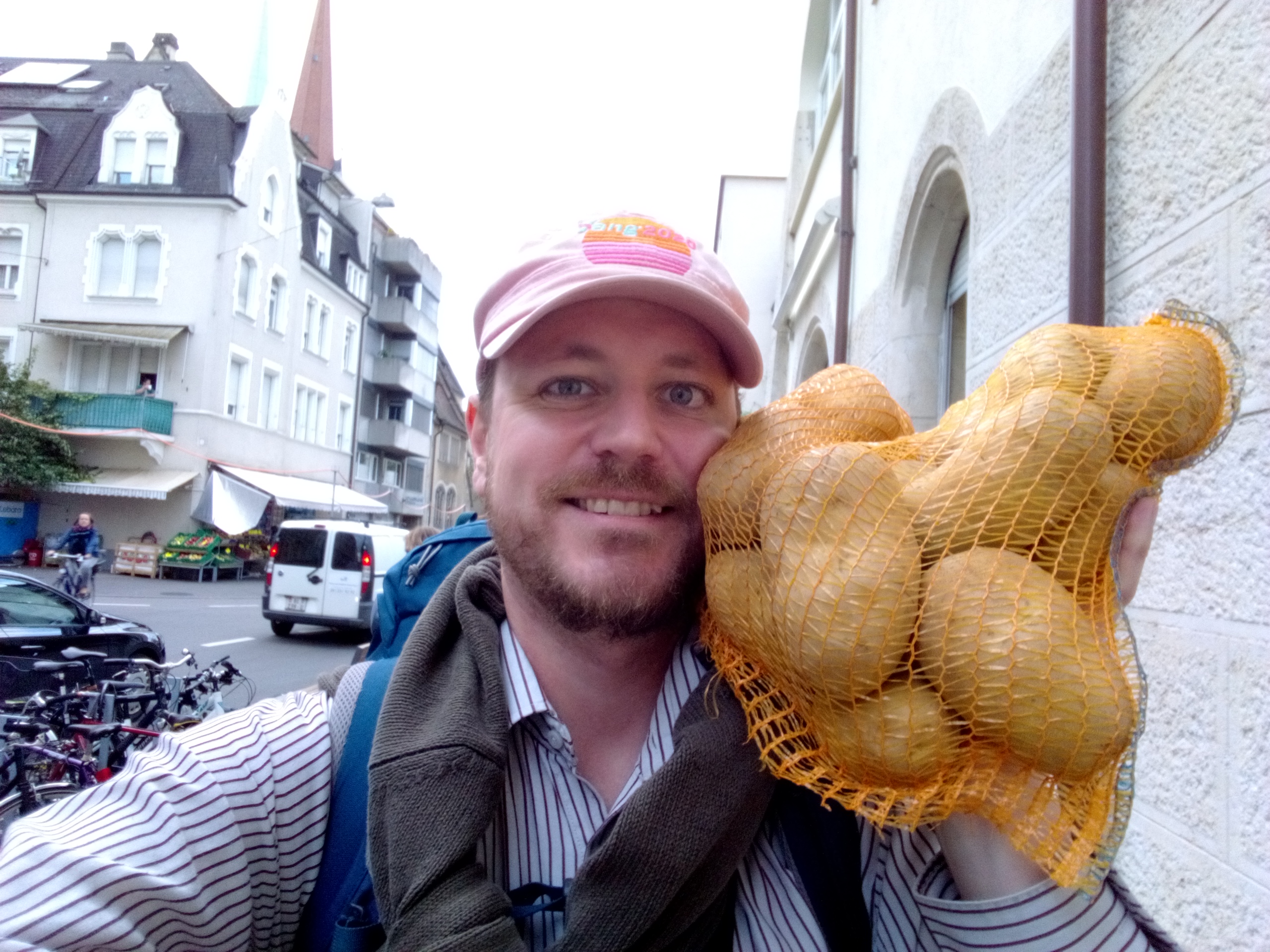 There were plenty of pretty apartment buildings, and I chose the one above to take a picture of. And because of the morning sun, one of the inhabitants had her breakfast in the open! Just

There were plenty of pretty apartment buildings, and I chose the one above to take a picture of. And because of the morning sun, one of the inhabitants had her breakfast in the open! Just like in Sweden.

After I took the picture though, she started to scream. A dirty man with a big black dog came and the dog was barking at me like if I was a stupid-ass tourist taking pictures of homeless people just for the fun of it. I have no pictures of the dog since I hasted away, afraid of getting my balls crashed between the dog’s giant teeth, as it kept on barking and jumping while pushing the man’s arm till its brink. I didn’t relax until I turned right at the next street corner and was under the guardian of le station centrale again.

In this corner of the station, Jews were deported early in the morning once a week to Nazi Germany’s concentration camps. There was a group of Chinese talking there. Thinking of yesterday’s news about blindfolded Uyghurs made me want to strike up some kind of comparison between the Germany of the 1930s and China of today, but for several reasons I abstained. One was having a wet ass after a one euro toilet that kept flushing itself while being used, and another being my train to Switzerland.

I went to the restaurant car, and realized that I was now under the supremacy of Swiss prices. I ended up with pasta and pesto for 13 €. Mostly because I hadn’t had any pasta at all in Italy, which is almost criminal. The pasta was excellent btw, and there was lots of it. The guy above started talking to me. He was from Utah, and now doing Europe for seven weeks, together with his friend that he was now so tired off that he sat alone in the restaurant with a glass of wine despite the time not being 12. As a Swede, the image of a lone drinker really hurts my ass, so I put my Social Democrat ass down and ordered a five euro beer to keep him company and listen to all his problems. He said he liked my pink hat. I noted that he had pink glasses. Later, we both started realizing something very important about wearing pink, but I can’t tell you here, since he also figured out that we are both mass murderers. Him, because he had ideas of marrying rich and *oops*, and me because I rode trains and slept on roofs. I didn’t follow it entirely but Utah logic is a bit like that, magic underwear etc. I told him all about Andrew Yang, and he liked (or pretended to like) the idea.

The Swiss can generally be labelled Conservative, but very pragmatic. When heroin got popular in the 1980s, they first tried to punish it away. However, a drug that addictive can’t be punished, so since the 1990s they give it out for free, such as in centres like this one. The result is addicts that get a lot better lives (less HIV etc) and that causes very little crime. Compared to Sweden where addicts live horrible lives, make tons of crimes and die at the second highest rate within the EU. Maybe Sweden could learn from Switzerland! I’d love it.

Fun story: once upon a time I had burglary in my office. I called the police, and then the landlord to ask for the place to get locked again, since it was now open for anyone to come in. I couldn’t work since they took the computer, so while waiting, I read a book I had in my backpack. It was an autobiography, and as I sat there in my chair, the author wrote about how she and her boyfriend broke into an office and stole the computer in order to buy heroin! Just give it to them, and we take away a lot of power from the mafias currently selling us heroin. I’d love my taxes buying heroin to people who once upon a time sank into that hellhole by wanting to get high.

Then I got potatoes.

The potatoes – and some other ingredients – were made into a lovely Serbian/Hungarian soup, served with the wine I brought from Naples. Tamara is like that – new people always get dishes that she has never cooked before. So you become a bit of an adventurer. Here’s also Moni who works as a manager at a Danish store chain, and Svenja who just graduated in comparative culture studies. We talked about India, South America, business, the music Swiss with Dawns syndrome like, the similarity between Sweden and Switzerland in every language we knew, and so on. I even learned how to ask Brazilian questions, which could open great doors for me. Or put me in the trouble.