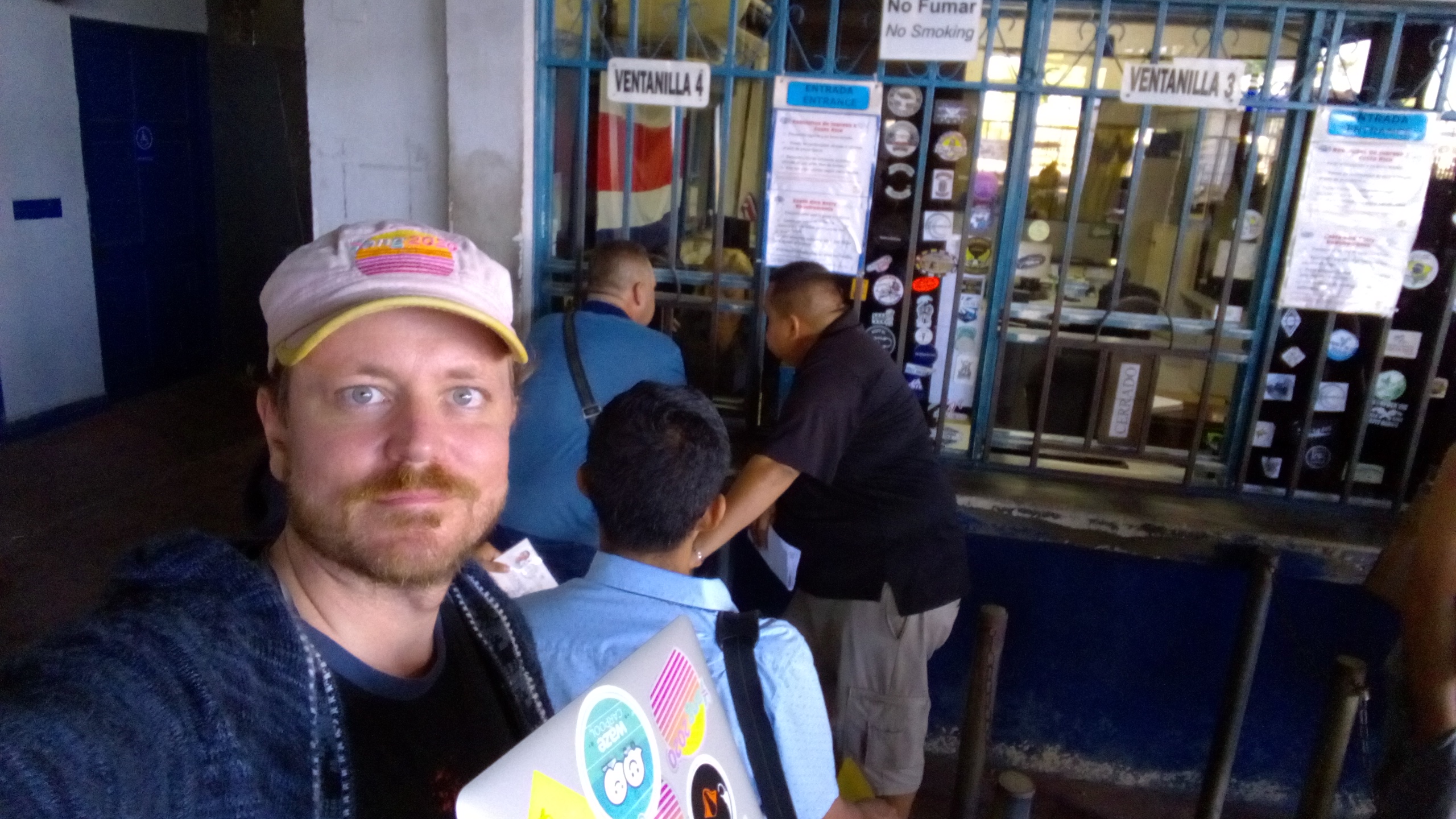 Good morning! I had a good sleep in the last seat, a good old trick of mine 😉 We are at the border to Costa Rica. A truck with a history … Do you see

Good morning! I had a good sleep in the last seat, a good old trick of mine 😉

We are at the border to Costa Rica.

A truck with a history …

Do you see the Indian guy in the middle? We became friends!

Here we are, looking at the entrance for Costa Rica. It wasn’t that obvious what to do. OTOH, the road only led in one direction, so there we went.

At the border, everything took a long time. Apparently, you needed tickets out of there to get a visa. A lot of people started buying from our bus company, at high prices. I already had my ticket. On the Internet. Failed to download it. I was going to say something about “you must tell us to print our tickets!” when I realized that the email I got, had that, and only that, as it’s message. Note to self: read emails. But anyway, just showing the computer, despite no info in the email, made it for me 🙂

And here we met another great friend, Juiying from Taiwan! My favourite Chinese democracy. We discussed about whether the Taiwanese president had cats or dogs. I thought cats (which I love) and she thought dogs (which she loves). I’m googling it now, and found this interesting Wikipedia article about her cats. She is definitely a cat person, but also adopted three dogs after becoming president. According to one newspaper, the dogs are supposed to be Mainland China, so she having both cats and dogs is a measure of peace.

Anyway, I got a 90 days visa, Juiying 10 days, and Niraj (the Indian) 5 days. Racism? Or passportism? We have to send some black Swedes with Swedish passports to find out 😉

Inside this cage we had to wait for a long time to get our luggage checked. They searched through a lot of bags. We came at the very end, and by then they were tired, and just let us through directly.

I’m staying in this hotel, which was the closest to the bus station. It was very deserted by all people. I think I was the only one inside the dorms. I asked the owner to print all my tickets, and he was very helpful. He even called around for laundries that could do my clothes the same day, but with no luck.

And then we had dinner 🙂 It was surprisingly fun to talk about our lives and minds. Like, the history, the future and all. It’s interesting that I was sober, since I was the last time in Costa Rica as well, in 2002. Back then, I won a slogan competition for Fairtrade Sweden. The slogan was “Buy a better world” and it gave me two weeks in Costa Rica, with a friend and a journalist. I had a being sober competition with two friends, for a couple of months. I won of course 🙂 But it was boring to be sober in Costa Rica. And it was boring now. But at least we had some good conversation.

I had quesadilla with hummus, salsa and beans! Everything you need, nom nom.

I took an Uber home. Some youngsters being checked by the police. Maybe they had DRUGZ.

I have to give you this photo that my camera took by itself. Maybe it could be a picture of my dreams, as I sunk down alone in my dorm room. Zzz.