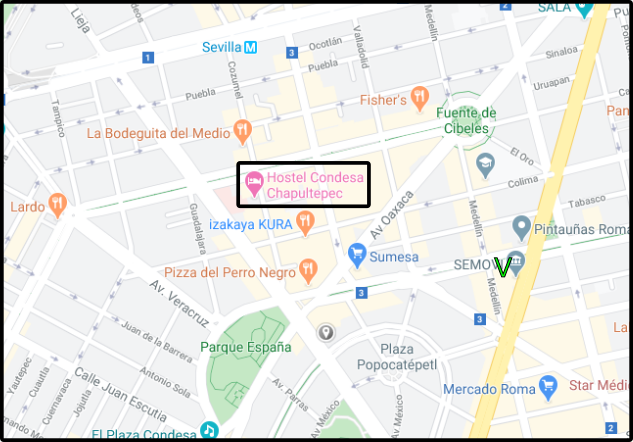 I love Mexico City. I thought that it would just be tons of cars under a grey, heavy sky, but it’s been a paradise! There are though, quite some cars. Not just that you have

I love Mexico City. I thought that it would just be tons of cars under a grey, heavy sky, but it’s been a paradise! There are though, quite some cars. Not just that you have to wait for them while crossing streets, but rather the feeling that they own the city. There are plenty of areas where cars can drive in all kinds of ways, and as a pedestrian, you just have to stay and look in all directions, wondering when it’s OK for you to make a move into the wilderness. If Mexico City wants to make Condesa a top choice for international travellers and local “hipsters”, then they need to get rid of most cars.

And I’m not speaking of removing them altogether, no no. Cars must always have access. In a city that has somewhat of a reputation for crime (although Mexico City is definitely not the worst Mexican city – not even on top 50), it’s great to always be able to have an Uber, and having to move around to get one is not what you want in order to have a safe good life. Instead:

I’ve drawn it here. It’s the red line, with a station called “Untz untz untz”. I’m of course open for other lines and names.

Walking through a city designed for cars, is like trying to live a life as a woman in a society designed for men, like Frida Kahlo tried to do. Mexico has several cities whose murder rate are worse than the number of civilians dead in for example Syria during the war’s worst year. Right now, every single day. And females are a large part of it, often sexually harassed first. The number of dead women have doubled in the last five years. It’s like, when everything is violence anyway, people with guns simply take what they feel like. There will a huge feminist strike on March 9. While the left-leaning president says this is being caused by “neoliberal policies”. That’s interesting, since the murders and robberies in Sweden are also because of “neoliberal policies” according to our left-leaning prime minister. While I think that much of all this comes from us giving a large part of our economy to people who kill others, making killing a lucrative trade, as well as everything that comes with it.

Here is woman on a bicycle, carefully entering the road for cars. And what’s on her bicycle? Car stops! If someone parked their car, without paying the super-cheap parking ticket, then she stops it, and they can’t drive anywhere before paying up for killing this city and its inhabitants. This is my type of woman!

I walked around for an hour, until the best vegan ramen place was open at 10. I tried different noodles. I think that in order to make ramen a really nutritious dish, we must find something to replace the wheat noodles with. But the noodle taste is like 40% of the experience. And in my opinion, only wheat tastes good enough. I think this is a challenge for the Japanese food experts to solve! Or the Mexican. But the soup itself was heaven, like before.

Two days ago, I felt I missed some money. That happens to me all the time, BTW. But when checking my bank account and going back in history, I always find what I bought. But this time, I’ve been lying sick and only going for some ramen. I made a detailed post-budget including every chewing gum. Depending on how much coins I had left, I missed somewhere between 490 and 510 pesos. That is a 500 bill.

Whenever I stay somewhere, I try to value the risk of getting robbed and the risk of having burglary. If robbed > burglary, I leave stuff at home. If burglary > robbed, I bring them with me. In Latin America, I always think the risk of getting robbed is higher. I’ve heard plenty of stories of robberies and pickpockets. I’ve only heard one story about a burglary, and that was a normal apartment. I think hostels are actually super-safe. I’m not sure why, but maybe there is simply too much of a cost to get inside. You have to show your ID, pay money etc. And travellers themselves don’t steal much. So I’ve kept my main cash, computer etc, inside my locker in my empty room. And the lock for the locker, I got from the person working there.

So it must be that she has another key for the same lock, and opens it when I’m not at home, and grabbed a 500 peso bill (23 euro). So before going to eat breakfast today, I left five 200-bills in my locker. After coming home after two hours, my room was cleaned, and I only had three 200-bills left. That settled it for me. I would never have accused anyone if I just lost 500, because of the probability that I just forgot about them, but now, 500 + 400 = 900 was gone, and I wanted them back.

I opened this dark alcohol-free beer. The good thing with alcohol-free is that you don’t need to check the time first. And lying there and drinking it, I heard sounds from below. The woman was back. I went down to her, took a photo of her, showed my cash bag, and said that A) She gives me 900 pesos or B) I call the police, tell her owner, and write bad reviews.

She got a bit aggressive instantly, which I saw as a sign of my suspicions being correct. She spoke a lot of Spanish, and I said “No español, I call the police at 1”. It was now 11:30, so she had one and a half hour to get the money. I went up to my bed, and tried to relax with my beer. Which was fantastic.

She came up for a while, and tried to make me delete her photo. She sat on my bed and was talking, talking, talking. Eventually she gave me 400 pesos. And then wanted me to delete the image. I said 500 more. She kept on talking, talking. I’d love to use the computer for some Google Translate, but she was really touchy, as in trying to get hold of things. I wanted her fingers away from everything I wanted to be mine. She left, and then came back later with 500. I deleted her photo. She also wanted her lock back 😀 “Oh, here you go, thank you for lending me your lock!”. I said I wanted to stay one more night, which was already paid. She left, and somehow looked so … content.

After some minutes, I decided I needed to get the f out of there. I mean, how to have a shower, how to leave for ramen, when you can’t trust the person you stay with? So I went down, asked for my money from tonight back. She played all like “no, it’s paid blabla” so I started shouting a her, hard, in English, how she stole from me etc. So I got my 200. Went up to pack, and first went online to find another hostel. She came up and wanted me to go directly. I tried to explain that I first had to book another hostel. Then she went down, and turned off internet. I thought that “OK, she’ll get a review then”. Which in a way felt good, since although I understand why she took my money: their hostel is dying and they don’t know what to do about it – I think this crime need something worse than just giving the money back. A review would do it! Here’s a first one on my blog:

That’s the hostel you need to avoid. Or buy 😉 Fantastic area, and the hostel rooms are OK as well. Just make room for the partiez! Do you see the V on the lower right? That’s the 5 star vegan ramen place! You have to go and try it. Miso, wheat noodles, completa.

Later, I sent a snail mail to the hostel, with a google translate of this text:

Of course it’d be better with a non-Google translation, but I can’t spend my life on this hostel. We’re done now!

Before the old thief robbed me off my internetz, I had decided for a hotel by Hidalgo. They had get the best reviews of all hotels. My stuff must be safe in there!

I had a coffee in Starbucks to get the main address, and wrote a nasty review on Hostelbookers. They still haven’t published it. Should I write Hostelling International and tell what one of their members did to me?

It took me some time to check-in at the new hotel, partly because the owner had a baby to take care of. But I didn’t mind at all! I was just so happy to be in a safe and orderly place.

I got my bed, took a long, dear shower, and gave my clothes to a nearby laundry.

It was lunch time! Here a feministified statue in front of a BRT bus, which Mexico City also has in addition to all the lovely subways.

On the way to the new ramen place, I found a Chinese shop, in which they had Mr. Brown coffee, from Taiwan! It was delicious. Outright delicious.

Here’s a vegan ramen with lots of ingredients. The noodles were OK. The sauce was thin as hell. You could spice it up. I’d be proud if I had made it. I would maybe even give it to others. But in a restaurant? Nope. This was a 2 out of 5. It was not a 1 – I still loved eating it!

On the way back, I stumble into this Communist demonstration.

“Stop the outsourcing”. That’s funny to see in Mexico, a country you might see as a place where American outsourcing takes place. But I guess that a lot of stuff are being outsourced from Mexico to Central American countries, and to Asia. But according to today’s newspaper, many American firms will remove subcontractors from China to Mexico, now that they’re having problems getting stuff home from the virus.

I tried to find these 43.000 Mexicans, but didn’t. Because I don’t think these people are protesting everyone disappeared during Mexico’s suicide regarding American Friday habits.

I wonder why they have buses following them? To transport them later?

Back in the hostel, there was no electricity at all. It was all Paraguay on the inside. Best rated hostel! After an hour, we got some light. Later, I found a German party. Very nice! They were all working in orphanages, and in their leisure time, they liked having fun in for example Mexico City!

One of them dragged me to a reggae club. I haven’t been clubbing (except for the jazz club) so yes, vamos!

It was fun with some sober dancing. Then we went home to have an after party with a guy from São Paulo. My favourite city! Although Mexico City is definitely a number 2.